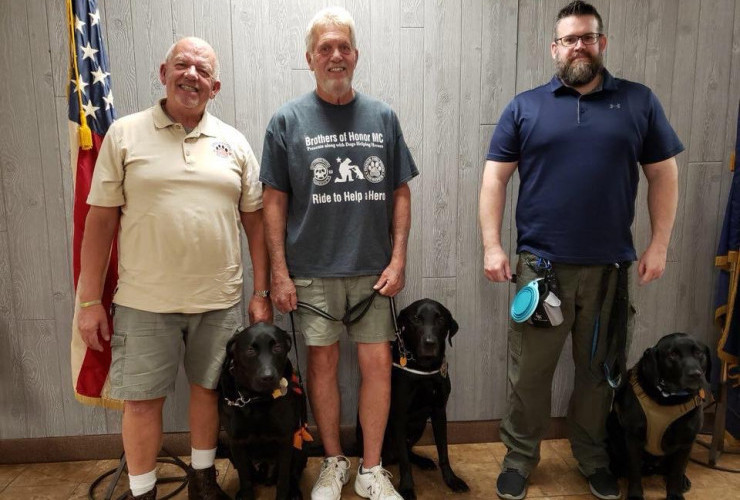 Jim Day served in the Army in Vietnam in 1970 with Delta Company/23rdlllth brigade. He was a “grunt,” beginning as a rifleman out in the triple canopy jungle-where the sun never hit the ground, up in the mountains to the rice paddies-which were too hot to walk on be-tween the paddies, this was great for booby traps. Jim hoped to go to sniper school and work with smaller units, which he did and was reassigned to Echo Co. 3/1st. 23rd Inf. Division and worked for infantry companies requesting a sniper team. When the American troops in Vietnam began to withdraw from the country, he was transferred to an assault helicopter company and flew as the right side door gunner on a “slick,” flying numerous combat missions. “We would return to base and count the number of bullet holes in our ships to see who had the most! On one occasion, my ship was brought down by enemy fire and we sustained numerous casualties on board.” Jim said.

After Jim returned from Vietnam, he began his career with the Police Department in Plymouth, Indiana. He started as a Patrol Officer advancing to Shift Sergeant on the midnight shift working his way up to Evidence Tech and worked as a Plain Clothes Officer, until he requested to go back into uniform. Jim was involved in a fatal accident while on duty and shortly thereafter had to go out on disability due to PTSD. He retired from the Police Department with 20 years of service

Jim was a shut-in after retiring from the Police Department. “I was always at home, it was my sanctuary and a safe space,” Jim says. Then along came Dogs Helping Heroes and Service Dog-Samson.

Samson was rescued by Adopt Me Pet Rescue and began training at The Paws Behind Bars at Luther Luckett prison. He was transferred to Duffy’s Dog Training Center for his final service dog training and then placed with Jim.

Jim takes great pride that his wife, Diane, is also able to control Samson. Diane was able to attend training with Jim & Samson to learn the commands and how to control Samson. “Samson gives support if I need it due to back issues, all I have to say is “Support.” He sleeps with me every night and if needed he pushes that big wet nose in my face and he brings me back.” He is a friendly black lab that loves food and attention. Jim is very passionate about the mission of Dogs Helping Heroes. He and Samson love to do presentations and outreach to other veterans and first responders. “Samson has restored my freedom. We are never home anymore and we are enjoying life.” says Jim. Jim, Diane, and Samson go out for breakfast several times a week. Samson takes all of the attention and Jim is now able to confidently speak to people.

Pictured with Jim are John W and Ryan B